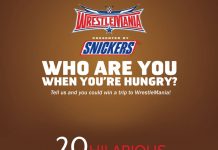 As part of the WWE and SNICKERS partnership for Wrestlemania 32, WWE Superstars and Divas will be promoting the WWE Hungry For Mania Sweepstakes, a promotion inviting wrestling fans to tweet about who they are when they are hungry for a chance to win a trip to Wrestlemania in Dallas, Texas on April 3rd.

During the campaign, you’ll have the opportunity to check out a series of videos featuring some of the most popular WWE Superstars and Divas including Roman Reigns, Paige, The Miz and Dolph Ziggler. These videos will be released weekly on YouTube.com or on social medias including Facebook and Twitter.

This week, watch who Paige is when she’s hungry in this hilarious WWE TV commercial.

The WWE Hungry For Mania Sweepstakes runs from February 22nd through March 18th. Tweet now using #HungryForManiaSweepstakes for your chance to win.

No payment, entry fee or purchase required. Open to residents of the forty-eight (48) contiguous United States and the District of Columbia. Entrants must be at least eighteen (18) years old at time of entry. Visit www.wwe.com/hungryformania for official rules and more information on how to enter the WWE Hungry For Mania Sweepstakes.

About The WWE Hungry For Mania Sweepstakes Paige TV Commercial