Each week, a new special code word will be revealed during the airing of Star Kids on Food Network. The codeword may appear on the screen at various times between 8:00 p.m. and 8:59 p.m. So make sure to watch the entire show not to miss it.

However, it may happen that you miss the Lucky Star code. This is why we decided to create this list. Come back every Monday starting at 8:00 p.m. ET and take note of the correct code word below. 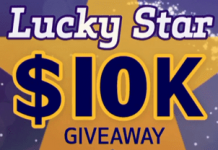 TLC Dragnificent Trivia Answer Of The Week Is…